All FIM projects need to be able to schedule management agent runs automatically. This blogpost describes how we implemented a windows service to schedule Forefront Identity Manager synchronization service. You can find the source code and an installer at FIM-Scheduler.

We started of by implementing the management agent run functionality in C# by calling the WMI interface using the System.Management library.

We gave every type of step a different implementation, so the result has the following structure: 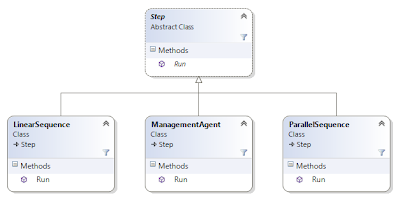 It is very easy to create a windows service with Visual Studio since it is a standart project template called, surprisingly, Windows Service.
All we needed to do was add an installer so that the executable can be installed as a service using sc.exe or installUtil.exe. There are some very good tutorials on how to create a windows service, so I'll just give you the link I used: Creating a Windows Service Application.

At the moment we have a program that is capable of running a given schedule and a windows service. The last issue we need to resolve is how we are going to perform the actual scheduling. Some googling gives you some options, and we chose to use the Quartz .NET library.

Quartz.NET is a full-featured, open source job scheduling system that can be used from smallest apps to large scale enterprise systems. Quartz.NET is a pure .NET library written in C# and is a port of very propular open source Java job scheduling framework, Quartz . This project owes very much to original Java project, it's father James House and the project contributors.

After some trial and error we succeeded in configuring a Quartz scheduler that read his configuration from a file and started a job. Then it was just a matter of implementing this job so that it would start the steps in the runconfiguration specified by the Quartz configuration file.

A new edition of OBUG's BeNeLux Connect event is scheduled on March 26, 2013. Be sure to check out session "The Identity Management Journey" (Session 1 Track 7) in which Telenet and IS4U will present Telenet's Oracle Identity Governance success story!
Feel free to register and join the show! 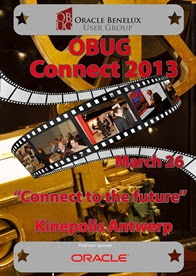